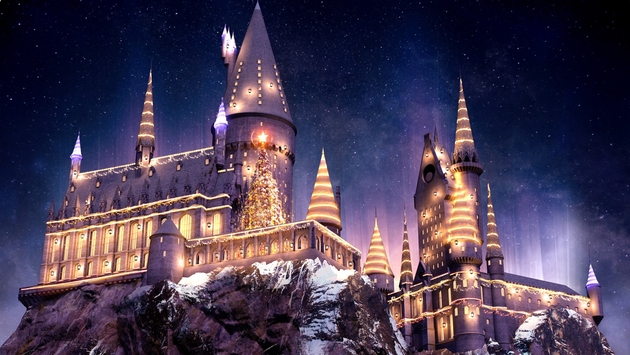 Celebrate Christmas in the Wizarding World of Harry Potter

Well in 2017 Disney Hollywood Studios has torn down the NY city streets that use to be decorated for Christmas so there paying for the Mickeys Very Merry Christmas Party special event is now your Disney World option.

But there is an Amazing Christmas Party coming to Orlando Florida in 2017 that most people don’t even know about.  I predict this is going to be the most successful Christmas event in Orlando.  It’s at Universal Orlando Resort and will be at BOTH Universal theme parks.  Celebrate Christmas in the Wizarding World of Harry Potter.

If you have not been to see either Diagon Alley or Hogswarts at Universal Orlando Resort, they are stunning!  Even more amazing these two immersive lands will be decked out for Christmas with no detail left untouched.  From holiday treats, decorations, and entertainment.

I am most excited about Hogwart’s Castle.  There will be a reoccurring Christmas castle lighting that is like nothing you have seen before.  Best of all the castle lighting happens several times a night so you don’t have to stake out a spot hours before.

The Celebrate Christmas in the Wizarding World of Harry Potter is November 18 2017- January 6, 2018.

Best of all the Celebrate Christmas in the Wizarding World of Harry Potter event is included with your regular park admission at Universal Orlando Resort.

BRINGS MORE EXPERIENCES THAN EVER BEFORE

You Can Enjoy an Epic Holiday Celebration, Featuring New Experiences like Christmas in
The Wizarding World of Harry Potter and Universal’s Holiday Parade Featuring Macy’s and
Beloved Classics like Grinchmas, Mannheim Steamroller Concerts and More

Starting November 18, holiday cheer – and a little mischief here and there –
will take over Universal Orlando Resort for its destination-wide Holidays celebration. Guests of all ages will
enjoy a Holiday celebration like no other with more dates than ever before. At Universal Orlando you
can witness the magic of Christmas in The Wizarding World of Harry Potter, watch all-new larger-than-life
balloons and incredible entertainment fill the streets during the all-new Universal’s Holiday Parade featuring
Macy’s, uncover the true meaning of Grinchmas, rock around the Music Plaza Stage to Mannheim
Steamroller – and more.

Universal Orlando Resort’s Holidays celebration will run daily from Nov. 18 to Jan. 6 and include the
following festivities:

Christmas in The Wizarding World of Harry Potter

For the first time at Universal Orlando Resort, Christmas is coming to The Wizarding World of Harry Potter.
You will be surrounded by uniquely themed Christmas decorations, garlands and lights as they walk
the streets of Hogsmeade and Diagon Alley. You will also enjoy special holiday themed food and holiday
performances by the Frog Choir and Celestina Warbeck and the Banshees. And as night falls – state-of-the-art
projection mapping and lighting will wrap Hogwarts castle, bringing incredible Christmas moments inspired
by the Harry Potter series to life.

Universal Orlando Resort is partnering with Macy’s, the global leader in balloon entertainment, to bring a
brand-new parade to Universal Studios Florida. Universal’s Holiday Parade featuring Macy’s will feature more
than a dozen new festive balloons and over 15 incredibly detailed floats that can’t be seen anywhere else – all
designed exclusively for Universal Orlando. The parade will also include appearances by the Minions and
other favorite characters from Despicable Me, Madagascar and Shrek – and the jolly man himself, Santa
Claus.

Watch the Grinch’s heart grow three sizes during a live retelling of Dr. Seuss’s holiday classic
in the “Grinchmas Who-liday Spectacular” and join the merry Whos from Who-ville as they celebrate the true
meaning of the season and bring Grinchmas to life throughout Seuss Landing at Universal’s Islands of
Adventure. And, on sale now, you can enjoy a festive breakfast with the Grinch and his friends on
select dates.

Staying on-site is the best way to experience the Holidays celebration at Universal Orlando Resort. All five
hotels will glisten with festive decorations and offer holiday activities, including tree lightings, menorah
lightings, and Thanksgiving, Christmas and New Year’s Eve buffets.

To celebrate the New Year, you can dance the night away at EVE, Universal CityWalk’s dazzling
New Year’s Eve celebration. You can celebrate the New Year in style with the largest dance floor in
Orlando, live entertainment and endless decadent dishes and signature drinks. Tickets go on sale soon.
Access to Universal’s Holidays festivities at Universal Studios Florida and Universal’s Islands of Adventure is
included with admission to the parks. You can also book the Splash, Stay and Play package to
make the most out of your holiday visit to Universal Orlando Resort. Packages start at $99 per adult per
night, tax inclusive and include 5-night hotel accommodations at a Universal Partner Hotel, a 3-park 2-day
Park-to-Park ticket with two days free when booked by Nov. 30, and access to all three of Universal
Orlando’s theme parks including the new Volcano Bay water theme park. You can also upgrade your stay to include a Universal Orlando on-site hotel so you can enjoy exclusive benefits.