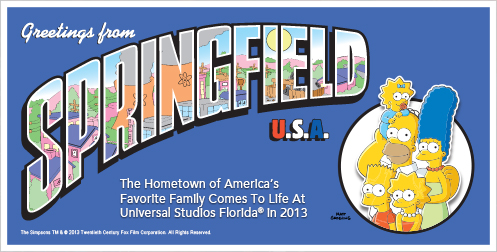 For the first time ever, guests can enter downtown Springfield and visit the places that helped the town stake its claim as “Shelbyville by the Sea.” Anchored by the mega-attraction, The Simpsons Ride, the newly-themed area includes iconic eateries and knick-knack nooks from the hit animated series, The Simpsons, and an all-new outdoor attraction based on the show’s “evil” alien duo, Kang & Kodos. Guests may even run into Chief Wiggum (if he doesn’t run into them first).

“Fans who love both The Simpsons and the ride at Universal Orlando will now be able to experience a much deeper immersion into The Simpsons world with the launch of Springfield,” said Jeffrey Godsick, President, Fox Consumer Products.

“I hope everyone has as much pure, irresponsible fun as we did writing the ride, signs and food menus. We raise our Flaming Moe’s to ye,” said James L. Brooks, Executive Producer, The Simpsons.

“When creating Springfield, we wanted to make guests truly feel like they’re part of the record-breaking animated show,” said Mark Woodbury, President, Universal Creative. “Now fans can become part of The Simpsons family and step inside the same places Homer and his family visit on a regular basis.”

About THE SIMPSONS
The longest-running scripted show in television history, The Simpsons exploded into a cultural phenomenon in 1990 and has remained one of the most groundbreaking and innovative entertainment franchises, recognizable throughout the world. Currently in production on its record-annihilating 25th season, The Simpsons has won 28 Emmy Awards and been nominated for an Academy Award in 2012 for the theatrical short The Longest Daycare. The Simpsons: Tapped Out is a top grossing mobile App and has ranked number one around the world on the App Store™ charts. The Simpsons Moviegrossed over $525M at the global box office and the revolutionary virtual coaster ride at Universal Studios in Orlando and Hollywood is a continuous hit. The Simpsons received a Star on The Hollywood Walk of Fame in 2000 and has been honored with five U.S. postal stamps personally designed by Matt Groening. Named the “Best Show of the 20th Century” by Time Magazine, in 2013 Entertainment Weekly named The Simpsons the Greatest American Sitcom.

The Simpsons is a Gracie Films Production in association with 20th Century Fox Television. James L. Brooks, Matt Groening, and Al Jean are the Executive Producers. The Gracie Films Worldwide Brand Division develops and produces the licensed content for the series. Film Roman is the animation house.

About Universal Orlando Resort
Vacation like you mean it at Universal Orlando Resort – where every heart pounding, jaw-dropping, goose-bumping second counts. With two incredible theme parks, Universal Studios Florida and Universal’s Islands of Adventure, three magnificently themed on-site hotels and a nighttime entertainment complex, Universal Orlando is the only place where you can turn spending time with your family into spending time as a family. Together, you can soar above Hogwarts with Harry Potter, swing above the streets with Spider-Man, become a minion in the hilarious Despicable Me Minion Mayhem ride, and join Optimus Prime in the fight to save mankind on the new mega-attraction, TRANSFORMERS: The Ride – 3D.